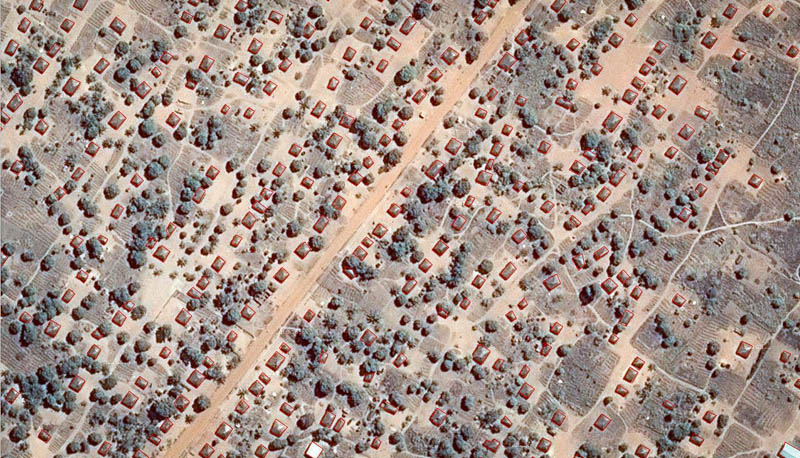 Indoor Residual Spraying (IRS) is one of the most effective tools in the fight against malaria. In Zambia, technicians enter dwellings once per year and spray the wall surfaces of buildings with insecticides that kill mosquitos who land on the walls and deter others from entering. Since mosquitoes feed in the evening and at night when humans are indoors, the spraying can greatly reduce the number of bites that occur.

But in rural areas like Zambia’s Luapula and Central Provinces, it is unclear how many dwellings exist, and where those dwellings are located. Without this information, deciding where to spray the insecticides is very difficult, the planners having no way to effectively target IRS to houses in areas of the highest malaria burden. While IRS remains one of the most effective tools for fighting malaria, the pesticides are expensive and must be targeted effectively.

So how to correct for this information gap? How to find out where exactly these dwellings are located so that they can be targeted effectively? Historically, if dwelling enumeration was done, it was done on foot, enumerators visiting villages in person, identifying houses visually and noting the GPS coordinates with a handheld device. It’s not hard to imagine that this method is extremely time-consuming and labor-intensive – especially for a large-scale enumeration. Zambia’s Ministry of Health (MOH), Ministry of Community Development Mother and Child Health (MCDMCH) and Akros technicians found a solution that is at the same time cost-effective and accurate, providing the pinpoint sort of data required for a more effective IRS implementation.

The answer is in satellites – specifically satellites that take pictures from space in impressively high resolution – one pixel per square meter. These satellites are already in the sky, continuously snapping pictures of even the world’s remote regions, and the imagery is provided for free through Google and Bing. What the MOH, MCDMCH and Akros team realized was that we could use this free imagery to effectively “visit” every village, enumerating these structures from above in a mere fraction of the time it would take on foot. And at this rich resolution, technicians would even be able to identify the roof type (thatched, tiled, or steel), and size, information that will be used to quantify the total sprayable surface area, an invaluable piece of information to have in the planning stages before spraying season.

So over the past few weeks, a team of nine technicians was given a two-day training in the freely available and open source Geographic Information System software QGIS, and then sent on a virtual journey around northern and central Zambia. In just 20 days they enumerated more than 270,000 structures – each technician personally identifying over 1,500 structures per day over a vast physical area.

“The information we gathered will give us the actual distances from health facilities to spray areas,” said Aniset Kamanga, Akros GIS Officer. “The enumeration process provides us with the number and aerial size of structures which we can use to estimate the total sprayable surface area.”

The project exemplifies the smart use of freely-available resources to improve public health. The data gathered will be used to inform decisions as spraying season approaches in August and September. Click here to learn more about the mSPRAY tool or here to learn about other innovative ways Akros is contributing to the fight against malaria. Results from the Chibombo pilot using this enumeration methodology will be presented at the forthcoming American Society of Tropical Medicine and Hygiene (ASTMH) conference in New Orleans.

The Africa Indoor Residual Spraying project (AIRS) protects millions of people in Africa from malaria by spraying insecticide on the walls, ceilings, and other indoor resting places of mosquitoes that transmit malaria, a process known as indoor residual spraying (IRS). AIRS project – funded by the USAID-led President’s Malaria Initiative and implemented by Abt Associates – manages IRS operations and logistics in 13 endemic countries. In addition, AIRS provides enhanced entomological monitoring in Burundi and the Democratic Republic of the Congo. Aniset Kamanga is a GIS Officer with Akros. He has a Masters degree in Public Health from the London School of Hygiene and Tropical Medicine. Before joining Akros he worked at the Malaria Research Trust focusing on malaria active case detection and the application of GIS and remote sensing technology to the mapping and real-time surveillance of malaria transmission.