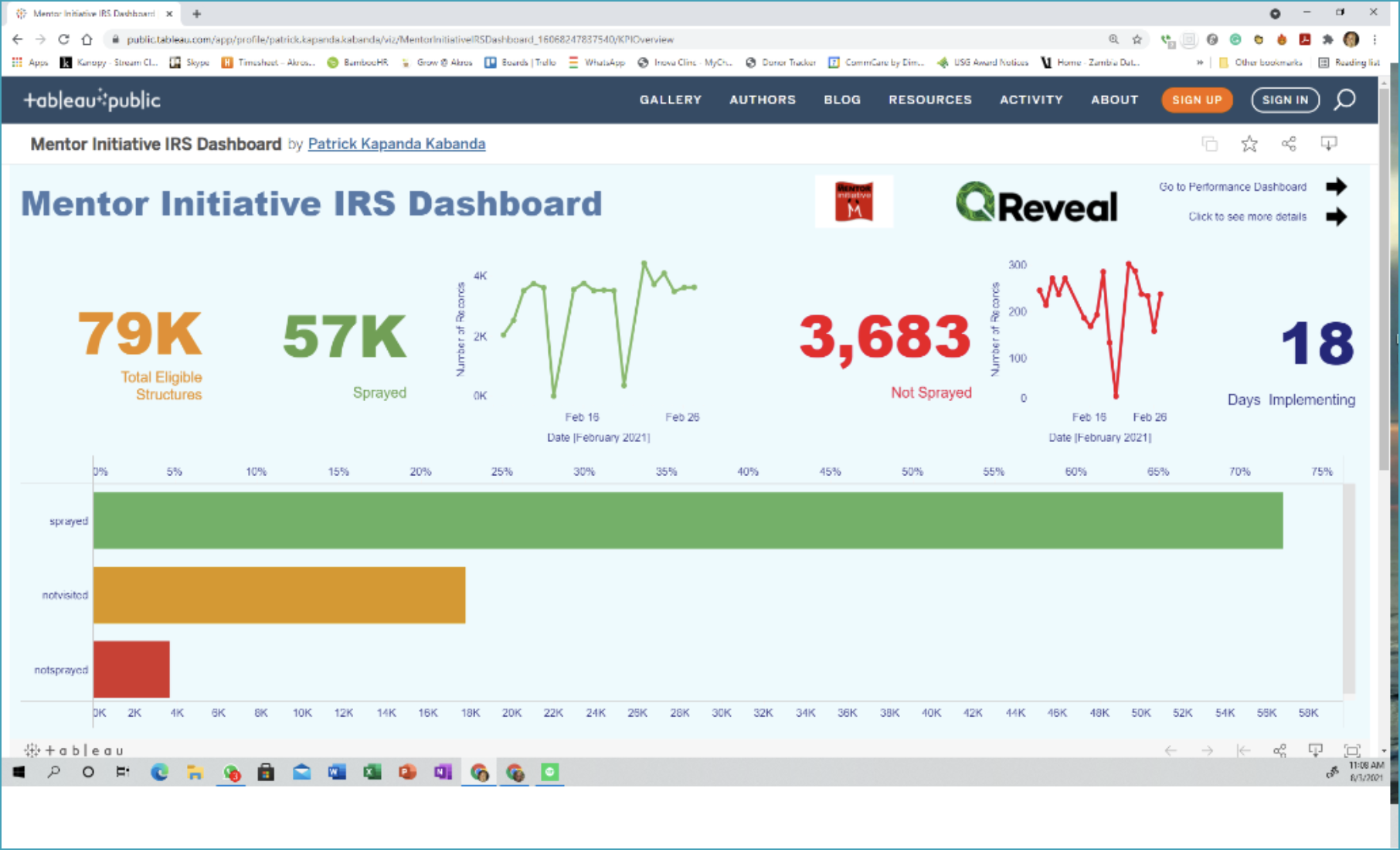 In recent years, countries within the Southern African Development Community (SADC) region of Africa have been making outstanding strides toward the challenging goal of malaria elimination. This commitment to elimination is the guiding mandate of Elimination 8 (E8), which focuses on the following countries: Angola, Botswana, Eswatini, Mozambique, Namibia, South Africa, Zambia, and Zimbabwe. Through E8, these ministerial bodies have resolved to coordinate their efforts to collaboratively work toward the shared regional goal of malaria elimination.

To that end, in 2017, E8 contracted with MENTOR to deliver indoor residual spray (IRS) in border districts of southern Angola. The MENTOR Initiative is a registered nonprofit organization devoted to reducing deaths and suffering from tropical diseases. In Angola, MENTOR has been a stable National Malaria Control Program (NMCP) partner supporting vector control, case management, and surveillance activities since 2004. MENTOR has established offices across  Angola and has full country reach in its operations, making it the ideal partner for E8 to engage for expanded IRS interventions. Since 2017, MENTOR has implemented IRS with reported high coverage rates in all campaigns conducted. For its 2020 campaign, MENTOR aimed to improve IRS reporting systems and increase accountability to donors and NMCP. To realize this goal, they chose to pilot Reveal—a digital global good and open source spatial intelligence platform used to drive the delivery of life-saving interventions. MENTOR collaborated with Akros to configure and support the field pilot of Reveal v. 1 in Menongue District (Cuando Cubango Province).

Through Reveal, field teams and managers use detailed household and community maps, protocols, and a data-collection and dashboarding platform for decision-making support to plan, implement, and adjust interventions so they achieve the greatest impact. Akros’ partnership with MENTOR Initiative to pilot Reveal v. 1 in Menogue District to support IRS delivery first included assessment and scoping to understand three key elements: intervention and data collection and management protocols, resource availability, and the environment within which Reveal was to be implemented and sustained. Akros then conducted system configuration to align IRS standard operating procedures (SOPs) with the Reveal platform, set-up mobile application and coverage dashboards, and configured feedback loops and tasking for unique user roles. Following that, the Reveal team participated in campaign planning, including enumeration and base map preparation and work to plan and validate in-field assumptions. Finally, the Reveal team supported implementation in December 2020 and provided post-implementation support.

The results were impressive, and echo outcomes and impact also achieved through other implementations of Reveal across southern and eastern Africa. Of the total enumerated structures that were eligible for spraying (57,208 structures in all), 53,543 were sprayed during the campaign, yielding a spray success rate of 93.6%. Reveal’s ability to display real-time spatial representation of implementation progress enabled field teams to deploy their resources with greater efficiency and precision. In turn, supervisors then used Reveal to identify areas with low coverage and were subsequently able to prioritize those areas to be revisited during mop-up operations. Daily syncing of data to custom web dashboards meant that communication was strong between supervisors, field teams, and local authorities. Meanwhile, custom safeguarding mechanisms strengthened data quality by reducing opportunity to capture inaccurate data. Team members from the Angola NMCP were pleased with the results and felt strongly that Reveal showed promise in supporting the country to achieve its malaria elimination milestones.

All told, despite the hurdles presented throughout 2020 by the COVID-19 pandemic, the Reveal pilot found swift success in its trial run supporting IRS in Angola’s Menongue District. Angolan field teams and managers were enthusiastic about the outcome and eager to use the tool for future campaigns. For the Reveal consortium, these results further confirm the resilience of the Reveal approach in tackling ambitious health intervention coverage rates with precision, even amidst a global health crisis. This degree of success has shown that Reveal is a dependable intervention tool that can accelerate the progress being made regionally toward lasting malaria elimination.