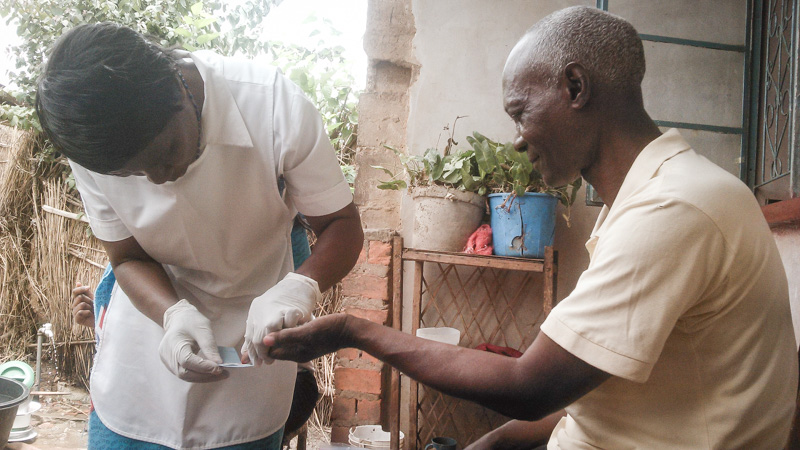 AID comprises two surveillance components, namely passive and reactive case detection. Passive case detection describes testing symptomatic individuals suspected of having malaria who have presented at a local health facility, or to a trained community health worker. Individuals who test positive by rapid diagnostic test (RDT) are then treated with an antimalarial or referred as appropriate. Reactive case detection ensures that confirmed positive individuals, termed ‘index cases’ are enrolled in a reactive response that consists of testing and treating malaria-positive family members and neighbors living within a 140 meter radius around the incident house.

Kaunda Square Clinic has stepped up its efforts this year in the fight against malaria by conducting its first reactive response on March 2, 2015. In one response, a team of a nurse, an environmental health technologist, a community health worker and an Akros field supervisor went out to an index house and 9 other houses surrounding it to screen occupants for malaria. The team responded to four index cases in two days, screening 40 total households. Of the 40 households screened with the use of rapid diagnostic tests (RDTs), no confirmed case of malaria was recorded.

“People believe Lusaka does not have malaria anymore and have become reluctant about the disease. However, it is important to continue sensitizing them on the importance of prevention and treatment of malaria,” said Memory Banda, the clinic’s community health worker.

The clinic previously received support from MESA and Akros in the purchase of Android-based Tablets that have a DHIS2 application installed on them. The application is linked to the clinic’s DHIS2 database and dashboards have been developed that enable the clinic to instantly monitor its data from the malaria rapid reporting system, the Ministry of Health’s Health Management Information System (HMIS) and the AID system.

“The tablet is user friendly, efficient and effective in capturing and transmitting data as opposed to the use of paper based forms that can easily get lost,” said Given Nseluka the clinic’s Environmental Health Technologist.

“The response from the community was overwhelming and encouraging as most people were willing to test for malaria,” said Justina Chenga, the nurse who is also the Prevention of Mother-to-Child Transmission of HIV (PMTC) coordinator.

Asked how the nurse felt after screening 40 households yet recording no cases of malaria, she said she was very excited as it was an indication that people were becoming free from the life-threatening disease in Lusaka. She also noted that it was a relief as it would have been expensive for the clinic to treat too many cases of malaria.