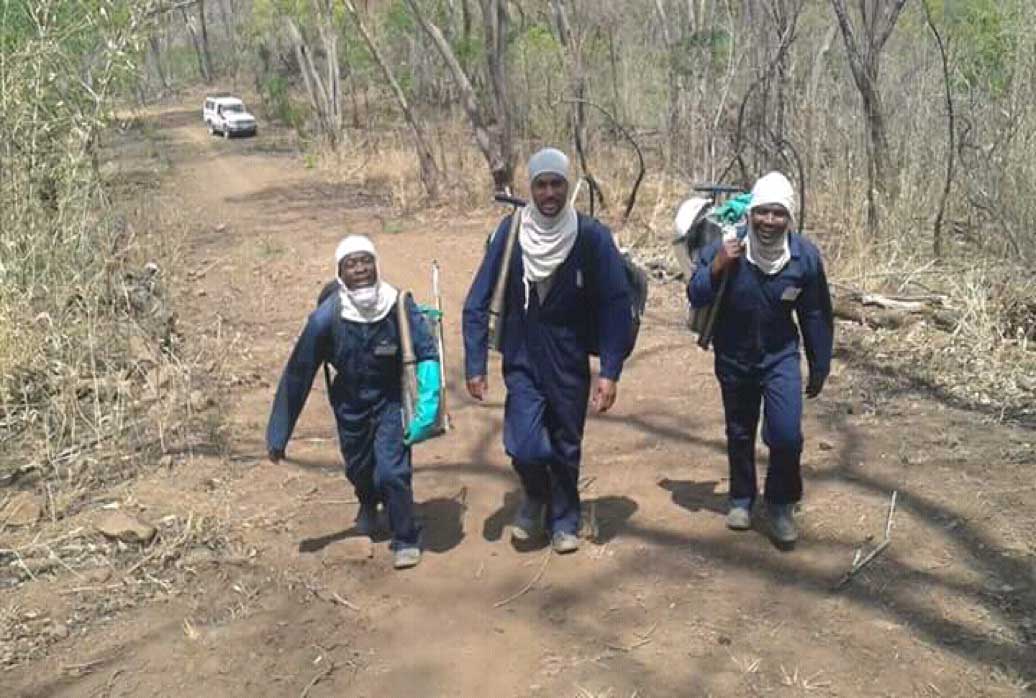 Finding a village never before visited by IRS

The mSpray tool is more than just a mobile data collection tool that improves data quality and timeliness. The mSpray tool provides spray teams with maps to navigate to areas that might otherwise be difficult to find. These maps are highly accurate and complete, made through our satellite enumeration process. The district mop-up teams are especially reliant on these maps. Mop-up teams, are teams designated by the district with the specific task of revisiting areas that were not sprayed well during an initial visit or areas that were missed completely.

Unsurprisingly, mop-up teams help more areas reach the coverage goal of 90% sprayed and these teams visit some of the most remote villages, some of which have never been visited before. Ernest Mulenga, an Akros Surveillance Officer, documents the Chadiza’s mop-up team visit to a village; because the the team relies heavily on maps to navigate, they adopt vernacular of mapping and navigation, referring to the villages by the codes assigned to the “polygon” shapes appearing on the maps.

It was the 9th of November 2017 when the mop-up team left Chadiza IRS base in search of Polygon 01-455 under Mtaya catchment area, which is located to eastern side of Chadiza district about 45 km from the district main post office.

Passing through Ngala area under Miti catchment, the team made a first stop at polygon 01-457 around 11:00 before proceeding to 01-455. The team used the GPS locator on the mSpray application, to navigate to a road that would lead to the village. Discovering the road to be impassable due to flooding from the heavy rain the team was re-directed by locals to a path that went through the mountain, and was said to be passable with a vehicle.

The journey through the mountain started off well. After climbing some distance, however, the path became too filled with potholes for the Land Cruiser to continue. The team was left with no choice but to complete the journey on foot. At this point the team felt that they had covered a considerable distance with the Cruiser and that the polygon must not be far off. Thus, the team began to move with the aid of a GPS on the tablet. Once the direction of walking was set, the tablet was switched off for fear of using too much battery power.

After moving for about three kilometers the team came to a place thought to be polygon 01-455. Unfortunately, the place was a ghost town, with no signs of settlement. Switching on the mSpray GPS, it became clear that the place the team was standing was not the correct one. Instead, 01-455 was a bit yonder. The team became perplexed and felt tired. It was at this point when the sound of an approaching motorbike was heard coming from the direction of 01-455. The team stopped the bike and, fortunately, the IRS manager identified the rider as a former spray operator, who participated in the 2015 spray season. The manager and the rider discussed, and the rider offered to take two team members to the area.

When they returned several hours later, the team reported that they had found polygon 01-455 and had sprayed all 18 structures. They also reported that the people living there were surprised because it was the first time they ever had a spray team visit their village. It was, in fact, a previously unknown settlement.

Without the aid of mSpray, this settlement wouldn’t have received IRS. One can only imagine how many settlements have been missed in past IRS seasons without mSpray. mSpray guarantees a level of accuracy in terms of IRS targeted coverage that can never be realized without it. Ernest Mulenga joined the mSpray team as an enumerator in September or 2017, and soon thereafter joined our team of field staff as an mSpray surveillance officer in Chadiza District, in Eastern Province. After the IRS season wrapped up he moved to his current role of Field Supervisor on another one of Akros’ malaria projects.