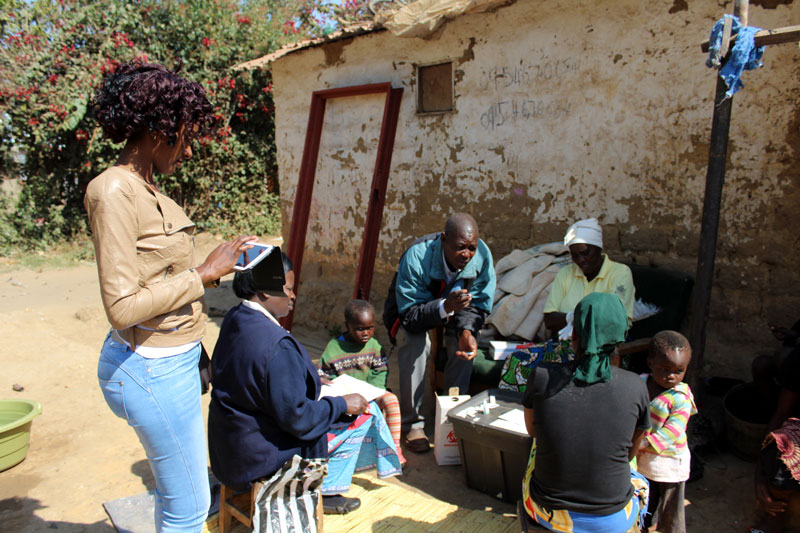 Chainda clinic has been working to contribute to this development with the use of android-based tablets for data collection through Step D since 2014. Step D consists of two surveillance components, passive and reactive case detection, in the community setting. Passive case detection describes testing symptomatic individuals suspected of having malaria who have presented at a local health facility. Individuals who test positive are then treated with an antimalarial or referred as appropriate. Confirmed passive positive individuals, termed index cases, are then enrolled in a reactive response that consists of testing family members and neighbors living within a 140m radius around the incident house and treating those found to be malaria positive,

Previously, data collection was done using paper-based forms at the clinic and during field responses. These paper forms would then be kept at the clinic until a central team from the National Malaria Control Centre (NMCC) was ready to collect them, usually on a monthly basis or staff at the clinic would take the forms to NMCC.

“In the past we used paper-based forms to collect data from the field and send them to NMCC physically, this would take time and make for a longer reporting period,” said Mwila Sianankange, an Environmental Health Technologist at Chainda Clinic.

“The easy availability of data has been able to greatly assist in decision making such as in the conduction of health education at the clinic and having accurate information on how many drugs and Malaria Rapid Diagnostic Tests (RDTs) are needed at the clinic,” said Rhoda Chipili Mwansa, Nurse in Charge at Chainda Clinic.

The composition of the team conducting Reactive Case Detection includes a nurse, an environmental technologist and a community health worker. An Akros staff member occasionally accompanies the team as a support staff.

“My role is to register people going for malaria screening at the clinic, fill forms for malaria positives including their name, age and house number as well as conduct social mobilization,” said Changata Banda, a community health worker.

Asked why she thinks malaria elimination is still a challenge in the area in spite of the many strategies employed, Bernadette Munthali, a nurse who is part of Reactive Case Detection at Chainda Clinic said the regular travelling of people to and from Lusaka has been responsible for the importation of malaria from high incidence areas to Lusaka, making elimination a challenge. She also added that Reactive Case Detection has assisted greatly in detecting malaria in its early stages therefore avoiding many complicated cases of malaria and deaths.

Another community health worker named Nelie Tembo stated that Reactive Case Detection faces some challenges which include people who test positive for malaria at the clinic not knowing their home addresses or giving a wrong home address. This becomes a challenge in following up cases of malaria.